Footage released by the Kremlin shows the long-range weapons being released at sea.

In a statement obtained by Newsflash, the Russian Ministry of Defence (MoD) said on 29th April: “The Armed Forces of the Russian Federation continue the special military operation in Ukraine.

“High-precision long-range air-based weapons of the Russian Aerospace Forces destroyed the Artem rocket plant and space industry enterprise in the city of Kyiv.

“High-precision air-based missiles of the Russian Aerospace Forces hit 10 military facilities in Ukraine. Among them: nine areas with a concentration of manpower and military equipment as well as an ammunition depot near the village of Ilyichevka.

“Operational-tactical and army aviation teams of the Russian Aerospace Forces hit 112 military facilities in Ukraine at night. Among them: two command posts, 11 strongholds, 95 areas with a concentration of manpower and military equipment, as well as four depots of rocket and artillery weapons in the settlements of Pokrovskoye and Gorokhovskoye.”

The statement continued: “In the area of the village of Gorokhovskoye, Mykolaiv region, a launcher was identified and destroyed along with a combat crew of the Ukrainian Tochka-U missile system, from which a strike took place on residential areas of the city of Kherson yesterday.

“Artillery units completed 975 firing missions during the night. 21 command posts, 69 strongholds, 763 areas with a concentration of manpower and military equipment, as well as 107 artillery positions were hit.

“As a result of the strikes, over 280 nationalists and 38 tanks and armoured vehicles were destroyed.”

“Also in the area of the village of Kamenka, a rocket from a Ukrainian Smerch multiple missile launcher was shot down.

“In total, since the beginning of the special military operation, the following have been destroyed: 142 aircraft, 111 helicopters, 634 unmanned aerial vehicles, 278 anti-aircraft missile systems, 2,638 tanks and other armoured combat vehicles, 304 multiple rocket launchers, 1,175 field artillery and mortars, as well as 2,467 units of special military vehicles. 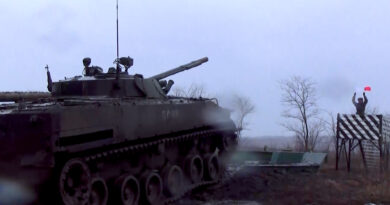