This video shows the moment an unvaccinated Sicilian nurse squirts a COVID-19 vaccine into a tissue instead of a patient shortly before she is busted while working in a hospital’s infectious diseases department with a fake green pass.

The incident took place at a vaccination hub in the city of Palermo on the island of Sicily in southern Italy, and it is believed that the nurse obtained the fake pass from a colleague who was arrested on similar allegations in December.

The State Police of Palermo arrested the latest nurse, who has not been named due to strict local privacy laws, for having given fake vaccinations to a married couple with ‘anti-vax’ views and for having been given a fake jab as well.

The nurse, who works in the infectious diseases department of the ARNAS Public Hospital in Palermo, has been placed under house arrest at the request of the public prosecutor’s office.

The investigation that led to her arrest had also led to the arrest of another nurse in the same vaccination hub last December.

The first nurse is accused of corruption, ideological falsehood and embezzlement, as well as carrying out fake vaccinations on 11 people, including a well-known leader of the ‘No Vax’ movement, who has not been named, but who is reportedly currently in preventive custody.

The president of the Order of Nurses of Palermo, Nino Amato, said: “The arrest of another nurse involved in the investigation into fake vaccinations at the Hub of the Palermo Fair is yet another very serious and disconcerting fact, which we stigmatise and condemn and towards which we will be inflexible.”

He added: “We have already suspended the first nurse arrested…”

Amato said that the order of nurses of Palermo would be a civil party to the proceedings. He said: “We have always acted and will act with the utmost rigour and with every possible tool against those who commit similar crimes and against anyone who damages the image of serious and competent professionals.”

The arrest comes after Italian cops smashed a gang who helped people to sign up to get the COVID-19 vaccine, which was then simply thrown in the bin, so they could get the green pass in the city of Ancona in Italy’s eastern Marche region.

A network of dozens of people involved in bringing people from all over Italy to the vaccination centre in the city of Ancona was busted after ‘patients’ were made to pay up to EUR 400 (GBP 334) for a nurse to simply squirt the dose into the waste bin, and then put a plaster on them and hand them a certificate.

A special police squad operating at the Paolinelli sports hall vaccine centre in Ancona discovered that people who wanted to avoid having the vaccine were bribing the 51-year-old nurse to pretend to give them the jab so that they could get the certificate.

Footage allegedly shows how the nurse pretends to inject the patient, but he then reaches over and injects the contents into a waste container.

Police say that the gang is charged with wasting public resources and also undermining the effectiveness of the public health work of the Italian national health system in tackling the spread of the COVID 19 virus. 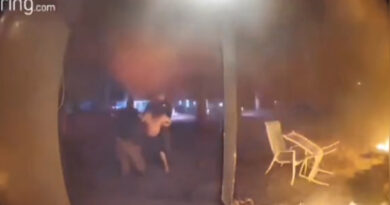