This is the moment a young Chinese man whispers sweet nothings into his lover’s ear, prompting her to lean in for a passionate smooch that results in them both tumbling head-over-heels down the escalator.

The not-so romantic moment was filmed in the city of Taiyuan in the landlocked Chinese province of Shanxi.

In the CCTV footage, the young couple is seen approaching the escalator while holding hands.

The man apparently whispers something romantic into the woman’s ear and holds his face close to hers.

Taken by the moment, the young woman leans in for a kiss, but a little too enthusiastically.

She unbalances her feller, who is pushed against the handrail and loses his footing on the escalator.

While still holding her hand, the man falls backwards and ends up taking his lover with him.

The pair rolls head-over-heels down the escalator steps before ending up at the bottom.

Apparently shaken and probably bruised a little, they then gather their bearings and the woman starts to get to her feet as the video ends.

According to local media, the couple helped each other up without further incident. 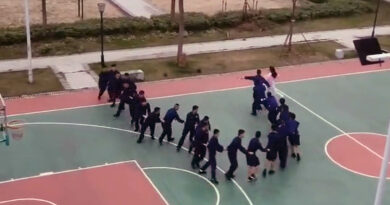 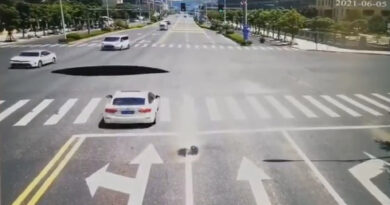 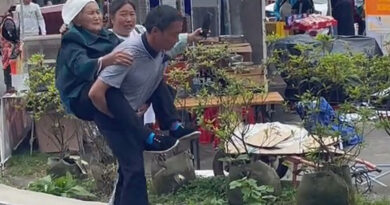 Man Carries Mum-In-Law, 84, On His Back Around Mountain Scenic Spot