Terrified Russian troops were sent running after a Ukrainian bomb landed at their feet in an aerial attack.

Footage of the assault on the Russian base was filmed by the 30th Mechanised Brigade named after Prince Konstanty Ostrogski, a formation of the Ukrainian Ground Forces.

It did not say where in Ukraine the attack was filmed.

The Ukrainian brigade said on 9th May: “As an enemy in training in Ukraine, we tested their physical fitness.

“The topic of the lesson for the ‘second army of the world’: basic physical exercise ‘shuttle run with full underpants’.”

The brigade added: “Occupiers, get ready: we have set a course for the second semester; train to squeeze into the ground in which you will remain.”

In the footage, two armoured vehicles are seen parking outside a building as at least two soldiers hop out and walk towards the base.

A bomb falls, apparently missing the vehicles but blasting one soldier on foot.

The scene cuts and a group of soldiers are seen running along the outside of the building while apparently carrying a dead or injured colleague.

Russia troops invaded Ukraine on 24th February in what the Kremlin is now calling a “special military operation” to “protect Donbass”. Today marks the 76th day of the campaign. 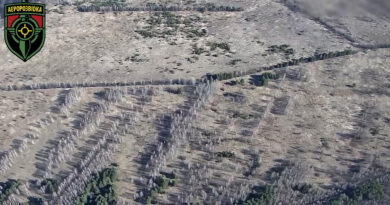 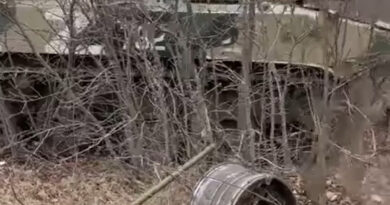