Tennessee wildlife officials have captured a huge, 36-stone black bear after it was found roaming near a university.

The bear was tranquillised near Tusculum University, in the city of Tusculum, in Greene County, in the US state of Tennessee, and was relocated in the Cherokee National Forest.

The Tennessee Wildlife Resources Agency (TWRA) shared a photo of a ranger posing with the tranquillised bear on social media on 24th March.

The agency said in a statement: “A 500-pound (35.7-stone) black bear living near Tusculum college in Greeneville had become habituated to human and unnatural foods and was relocated to a remote area of the Cherokee National Forest yesterday.

“Wildlife Sgt. David Carpenter says the bear had regular access to garbage, birdseed, and pet food had and been in the area for a few years but ramped up its activity and property damage last year.”

TWRA said: “Wildlife Officers decided to trap it then due to the increasing potential for negative interaction, but were unsuccessful after the bear changed its travel routine.

“Recent activity indicated it was back to its old ways and Officers Ryan Rosier, Austin Wilson, and Sgt. Carpenter located the bear in a small vacant wood lot and were able to free-range tranquilize it.

“They worked the bear up and requested the assistance of the Greeneville Fire Department to help move it to the transport cage due to its size.

“They were glad to help and were able to use some of their specialized equipment to expedite the process.”

The agency added: “TWRA is extremely thankful for their help!”

According to TWRA, reports of bears approaching urban areas and residents’ homes tend to increase in April as they emerge from their winter dens in search of food.

On its website TWRA officials said that Black bears roamed all of Tennessee at one time, but after European settlement the numbers started dropping.

They added: “Thanks to conservation and management efforts from all the Southeast states involved with the Southeastern Association of Fish and Wildlife Agencies (SEAFWA), black bears are making a dramatic comeback in the Southeast.

“As bears expand into areas with suitable habitat, it is important for communities to learn how to coexist with them.

“An example of a healthy black bear that is one that is able to eat and move normally in a natural environment.

“Bears in Tennessee and the southeast are primarily black with a long, straight, brown snout but in other parts of the country bears can be black, brown and white. A healthy male Tennessee black bear can be between 4-7 feet long and weigh as much as 500 lbs! 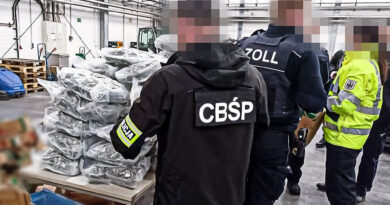 Cops Bust Drug Traffickers With Haul Worth Over EUR 1.2 Million Hidden In Tomato Crates In Back Of Lorry 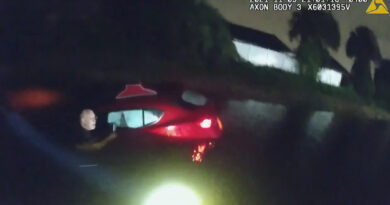