In a statement about the arrest, police said: “Criminal suspects never know how they will be caught or how quickly it will happen-but we imagine they must at least think about it sometimes.

“In this case, not only did GSP track this stolen vehicle and make the stop within an hour or so of the theft, but the foot speed of the APD officer who assisted was a track star-worthy performance. Because of the fast response, this juvenile suspect’s criminal high was short-lived.”

The incident happened on Saturday, 14th May.

Georgia State Patrol Troopers and Atlanta Police Officers located a vehicle that had been taken at gunpoint around an hour earlier.

The vehicle attempted to flee from police, but troopers performed a PIT maneuver, quickly stopping the car.

The driver fled on foot and was apprehended a short distance away.

Police added: “We hope this 16-years-old learned his lesson. He was charged with hijacking a motor vehicle and taken to the Metro Youth Detention Center.

“We are grateful for our partners with the Georgia State Patrol and we are proud of the work that went into quickly apprehending this suspect.”

Police Officer Awarded For Facing Down A Wrong Way Driver 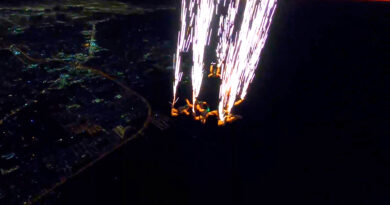