This critically-endangered baby macaque has been named Kiwi by online followers of an East Sussex animal park.

Cute little Kiwi was born at Drusillas Park near the town of Alfriston in East Sussex on 22nd June.

The Sulawesi crested macaque (Macaca nigra), also known as the Celebes crested macaque, is listed as ‘critically-endangered’ by the International Union for Conservation of Nature (IUCN).

Kiwi, whose parents are called Kera and Moteck, is growing up healthy and strong, and “delighting visitors this week by trying out some climbing, swinging, tumbling… and falling!”

Drusillas Park said in a statement that little Kiwi is starting to “brave life outside of the protective hold of its mother”.

Head zookeeper Gemma Romanis said: “We are chuffed to bits to confirm that both mum and baby are making excellent progress, and we are starting to see baby out and about bravely exploring.

“Kera is a brilliant mother; she was a total natural with her first born, Mango – who was born at Drusillas three years ago – and she’s proving herself once again with the new little one. We are really proud of Moteck too; it is great to see him getting really stuck in as a dad again.”

Drusillas Park said the macaque’s population has declined by 80 per cent over the last 40 years. The main threat to their survival is hunting and loss of natural habitat for urbanisation, coconut plantations and roads. In Indonesia, the macaque is also considered a delicacy and is often served on special occasions.

Romanis said: “As well as being totally adorable, the cause for celebration is that much more when we successfully breed a critically endangered species at Drusillas.

“The healthy arrival of this pair’s second baby provides a crucial boost for the macaque population, and we’re all really proud to play our part in keeping this beautiful primate from extinction.”

The park’s baby macaque was named Kiwi by Facebook users replying to an online challenge at the start of August.

Sulawesi crested macaques are known for their black hair, amber eyes, and bright pink behinds, although Kiwi will remain pink-faced and not develop these physical attributes for some months.

A Thirsty Bear Filmed Up Close Sipping Water From A Pond 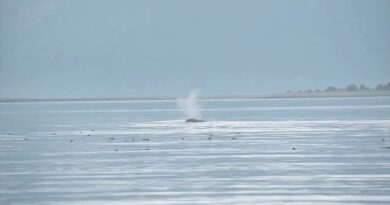 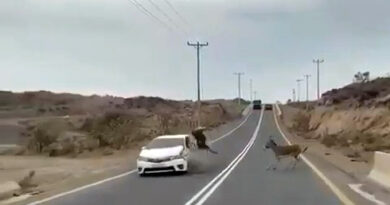