Houston police have released footage of an officer-involved shooting in a shopping centre after the suspect allegedly shot and killed a 62-year-old cop.

The officer-involved shooting took place at PlazAmericas shopping mall on Bellaire Boulevard in the city of Houston in the US state of Texas on 23rd February.

HPD (Houston Police Department) Critical Incidents shared the video on social media on 22nd March with the message: “This material is provided as part of a commitment to transparency by Houston’s mayor and HPD. The material has been redacted and edited to avoid the release of information made confidential by Texas law.

“The images and information depicted may be disturbing. When an officer uses force to arrest a suspect or defend against an attack, it can be graphic, difficult to watch, and may contain strong language. Viewer discretion is advised.”

HPD explained: “Body Worn Cameras (BWCs) are worn in the middle of the officer’s chest. As a result, the view may be blocked. They also do not show events that occur to the side or behind the officer. Additionally, the BWC captures video but not audio for two minutes prior to its activation. Finally, BWCs periodically emit a buzzing sound. This is an audible reminder that the BWC is recording.”

The City of Houston said in a statement on 24th February: “Houston police are investigating the fatal shooting of a San Jacinto County Constable deputy and a male suspect at 7500 Bellaire Boulevard about 4 p.m. on Wednesday (Feb. 23).

“The identity of the suspect, 35, is pending verification by the Harris County Institute of Forensic Sciences. He was transported to Ben Taub General Hospital where he was pronounced deceased.

“Two HPD officers who discharged their duty weapons, T. Salameh and M. Nasser, are assigned to the Midwest Patrol Division. Officer Salameh was sworn in as an officer in May 2020 and Officer Nasser in February 2020. Neither officer was injured.”

The city government added: “Officers were dispatched to an assist the officer call at the mall at the above address. Upon arrival, officers met crowds of people exiting the mall stating that a black male wearing a blue shirt was involved in a physical altercation with an officer inside of a business.

“Officers entered the mall and located the suspect coming from the second floor. He was wielding a knife. Officers took cover and utilized voice commands, but the suspect refused to comply with orders.

“When the suspect began charging at the officers, two officers discharged their duty weapons, striking the suspect. The suspect fell, got up and attempted to flee.

“Officers utilized a conducted energy device (Taser), causing the suspect to fall to the ground. The suspect continued to resist and officers eventually were able to place him into custody. Paramedics then transported the suspect to the hospital.”

The city authorities added: “As is customary when an officer discharges a weapon causing injury in the Houston city limits, this incident is being investigated by the HPD Special Investigations Unit, Internal Affairs Division and the Harris County District Attorney’s Office.” 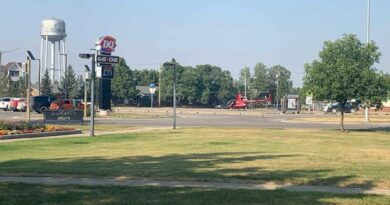 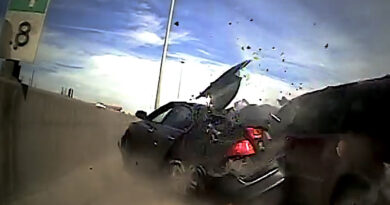 Pilot Forced To Perform An Emergency Landing After A Mechanical Issue