This is the scary moment dozens of hungry sharks circle the shallow water off the coast of Florida.

The fearsome scene was filmed near the village of Anclote in Pasco County in the US state of Florida in late April.

The Pasco County Sheriff’s Office (PCSO) said on 4th May: “A day in the water is a fun way to beat our Florida heat, but it’s important to be aware of the dangers below the water as well as above.”

The police said their aviation unit filmed the circling sharks near Anclote Key off the Gulf Coast.

The police also offered visitors and residents a list of tips to keep safe in the water.

PCSO said: “Our Aviation Unit captured this video of sharks swimming near the Anclote Sandbar and Anclote Island earlier this week.

“This National Water Safety Month, familiarize yourself with the water safety tips below before heading into the water.

“Be cautious of your surroundings. Learn to swim and always swim with a buddy. Keep a fully charged phone and first aid kit close by for emergencies. Never leave children unattended in or near water.”

The police added: “Share these safety instructions with family and friends to help them stay safe!”

According to reports, the area is home to blacktip sharks, lemon sharks, bull sharks, and great hammerheads, but the species in the footage is likely to be blacktips (Carcharhinus limbatus), known to grow up to 6.5 feet in length.

NOAA Fisheries describe the shark as being able to “leap and spin out of the water while feeding on schools of fish”.

The species’ mating season takes place between March and June. 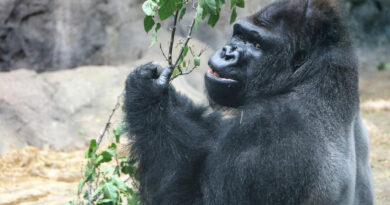 A Herd Of Rescued Elephants Seen Walking Down Road