These images show how Argentine security forces discovered 13 large dinosaur footprints while out on a routine patrol in Patagonia.

The officers from the Argentina Naval Prefecture, a policing force that operates as a coastguard and river protection service, was patrolling the artificial lake of Ezequiel Ramos Mexia, which has a large dam, located in Patagonia in southern Argentina at the tip of South America, when the discovery took place.

The Naval Prefecture released a statement saying that the footprints are from “a bipedal dinosaur of medium-large size”.

They added that “while conducting a patrol to provide security in the area, the team spotted 13 footprints on a rocky terrain and some fallen rocks from it, located about four kilometres from the area known as ‘Los Gigantes’.”

The prefecture added that they had contacted the Paleontological Laboratory of the Ernesto Bachmann Municipal Paleontological, Archaeological and Historical Museum located in the city of Neuquen in the department of Confluencia.

After analysing the images, it was revealed that the footprints appeared to be tridactyl footprints, which came from a medium-large bipedal dinosaur.

The statement also said that the officers contacted the National University of Rio Negro, which reported that the footprints measured between 30 and 50 centimetres and show three, elongated digits with pointed ends, which they said suggested that they belonged to a theropod dinosaur that would have measured between 1.2 and 1.5 metres in height.

They said that the species was probably carnivorous and had claws.

The naval prefecture also said in a statement that the rock-bearing levels where the discovery took place belong to the Candeleros Formation, a geological unit with an age of approximately 100 million years that is rich in dinosaur footprints and other Mesozoic vertebrates. 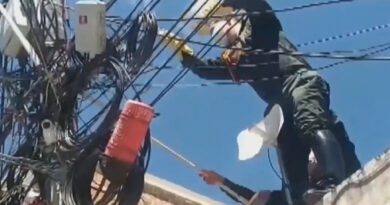 Colombian Cop Rescues Opossum Tangled In Phone Cables, Catching It By The Tail Before It Falls To The Ground 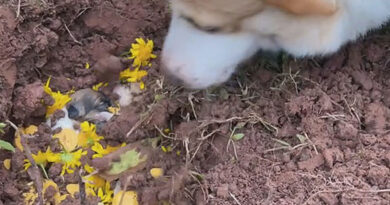