A gunman who had shot a relative in a row about a camper van was gunned down by police when he tried to fire on them from behind a bean bag.

Suspect Dewayne Davis, 35, had been hiding in a shed in Hillsborough County, Florida, USA on 23rd May from police investigating the first shooting.

Grim bodycam footage from officers searching for Davis shows how he was gunned down after he pretended to surrender.

Davis is hiding behind a giant bean bag and when a deputy pulls it away, he is seen to have a pistol in his hand aimed directly at the officers.

But as drops the first gun, he can be seen reaching for another and goes down in a fusilade of bullets.

Davis had been on the run since he shot a relative after an argument over floor work being done in an RV on 20th April .

When deputies quizzed his girlfriend, Dana Rice, 31, they suspected she was not telling the truth about if he was hiding in a nearby shed.

But when police found him in the makeshift hideaway both Sergeant Jason Goff and Deputy Charles Perdomo shot him down as he reached for a second gun.

Sheriff Chad Chronister said: “Our deputies’ lives were put at risk not once, but twice today.”

He added: “Rice’s decision to lie to our deputies put them in a dangerous situation that could have cost them their lives.

” As for Davis, he had no regard for anyone else’s safety.

” He was armed with multiple firearms, and it was clear, he did not want to get caught.”

Rice was charged with Resisting an Officer without Violence and Obstruction.

No deputies were injured in the incident. 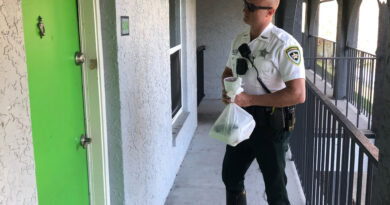 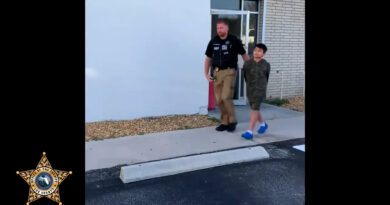 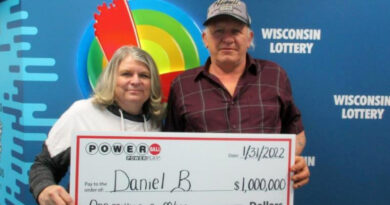