This is the moment a Chinese fitness instructor carries out gruelling workouts including leaping into the air with a super powerful push-up thrust or using hula hoops by balancing sideways on a pole.

The 34-year-old fitness guru, named Huang Haimu from the Chinese province of Fujian, shares his workout videos on TikTok where he commands a large following.

According to the South China Morning Post, Huang uses hula hoops and other simple objects as gym gear to keep trim.

In the first clip, the toned fitness instructor is seen using a pole to suspend his body horizontally in the air while keeping a hula hoop spinning with his waist movements.

The second video shows Huang suspending himself horizontally by his legs with his arms positioned behind his head while casually spinning the hula hoop with thrusting movements.

In the third clip, perhaps intended for a blooper reel, Huang is seen failing to do a tricky balancing stunt several times.

While doing push-ups on the ground, he tries to propel himself into the air to balance on two stacks of bricks. He manages to do the stunt on the third attempt, however one stack topples over when he dismounts.

In the fourth video, Huang does push-ups between two stacks of plastic chairs before propelling himself upwards and managing to suspend himself on top of the two stacks. 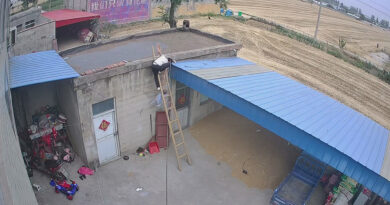 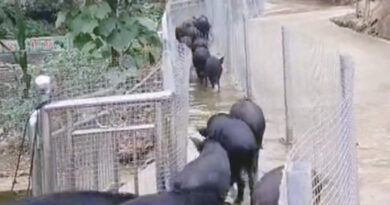 Moment Tibetan Pigs Plunge From Platform Into Water Like Lemmings 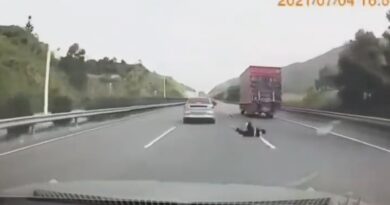