A woman who pretended to be pregnant before stealing a baby to pass off as her own has been arrested with two other women after they drugged the child’s mother and then killed her before fleeing.

The authorities believe the 31-year-old prime suspect, who was arrested with her cousin, 22, and her mother, 52, had snatched the infant to pass off as her own so her partner would not ditch her.

Days-old Alison Guadalupe Ayala Leal was stolen from the locality of La Mesa, in Nogales, Sonora, Mexico, by the younger two women in the trio on Saturday, 7th May.

The infant was found by the authorities at a residence in Agua Prieta – which lies on the US border and around three hours away by car from La Mesa – later that day.

Tragically, the baby’s mother Adriana was found dead. The authorities confirmed she died from suffocation apparently after being strangled.

According to Attorney General Claudia Indira Contreras Cordova, the two women had approached Adriana, her baby and Adriana’s mother in what was described as a “commercial establishment”.

They are believed to have offered the trio a lift home on the pretext that it was very hot at the time.

They won their trust and, after dropping them off, returned to offer them food, which, unbeknown to them, was laced with sedatives.

Inside the residence, they tied a groggy Adriana and her mother up, beat them repeatedly and took the newborn away with them in their car.

The Municipal Police of Nogales later found Adriana lifeless in the residence.

The authorities reported that the women then tried to cross over into the USA with the baby but were refused entry, as they lacked the required documentation.

The infant was later recovered from the residence in Agua Prieta and handed back to her grandmother and father in Nogales.

And cops arrested the three women suspected of planning the abduction.

They have been named as Iris Jazmin, 31; Vanesa Lizbeth, 22; and Maribel, 52. Their surnames were not divulged due to local privacy laws.

Iris – a shop worker – is believed by the authorities to be the prime suspect.

Vanesa is her cousin and the suspected co-perpetrator, while Maribel is her mother and was with the two at the time of their arrests.

It is believed Iris had been pretending she was pregnant in order to keep her partner by her side and stole the baby to pass off as her own.

Iris and Vanesa are being investigated for illegal deprivation of liberty, femicide (for suffocating Adriana), attempted femicide and aggravated robbery.

The authorities will confirm if Maribel is under investigation for any crime. 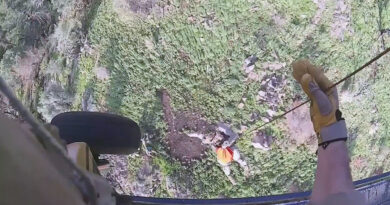 Car Seized After Cops Caught Drivers Drifting Around A Roundabout