A kindly Californian drama teacher who was often going out of his way to help and advise girl students has been exposed as a paedophile who was secretly filming them with hidden cameras and was caught when he accidentally shared the footage for a school promo video.

Ryan Pullen, 38, was sentenced to 364 days at El Dorado County Jail on Monday after pleading guilty to misdemeanour child abuse and possession of child pornography at an earlier hearing last month, according to local media outlet Mercury News.

The defendant, a former high school drama teacher, had been working at the Union Mine High School in the Californian county of El Dorado since 2014 until his dismissal in January when he was arrested.

Over several years, he filmed students in a state of undress after setting up a hidden camera in the dressing room of the school theatre.

The most significant piece of evidence was a video of female students undressing that lasted over seven minutes and had been edited to include “slow motion, pauses and cutaways”, according to court documents obtained by Mercury News.

In January this year, Pullen’s exploits came to light when his boss, Assistant Principal Lindsey Kovach, asked the drama teacher to supply photos and clips of past school events for a welcoming video for new students.

Pullen reportedly uploaded files on the school’s Google Drive, but quickly contacted Kovach to ask her to delete them because they featured family images.

She let the drama teach remove the files, but grew “suspicious of his actions and demeanour” and asked the school’s IT staff to recover what had been deleted, according to the police report.

They promptly found the video compilation of 15 clips of partially-naked students filmed over a period of several years, apparently from a hidden camera set up in the dressing room.

The court documents reportedly said the footage featured upskirt shots, bare breasts, girls in thongs, and were even edited together with “slow motion, pauses and cutaways”.

Pullen was arrested on 14th January and dismissed from his drama position after joining the school in 2014.

As well as the prison sentence, the former teacher will reportedly serve a two-year probation period and will have to register as a sex offender for the rest of his life.

During the hearing, he reportedly said he was undergoing a 12-step programme, adding: “Step eight is making a list of those we’ve harmed. When I realised the length of my list and the depth of the pain I caused, I wept.”

Ex-student Emma Sanguinetti said: “I went to him anytime I struggled with any class issues or confusion over a boy. It breaks my heart that somebody like you, as a friend, could break that trust. The results of your actions have hurt me and other students who looked up to you.”

Former pupil Joy Hensley said: “Now almost a year later, I still struggle with knowing what has happened. That constant anxiety that I am being watched. Ryan Pullen broke hundreds of students’ trust, his actions are just vile and disgusting.”

CHPD Officer’s Find And Chase Down A Stolen Vehicle. The Offenders Were Detained 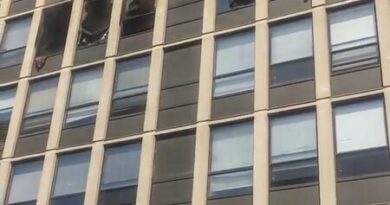 Viral: Citywide Search For Flying Cat That Had Never Been Outside Before It Leapt From Blazing Chicago Building