This is the moment motorists run in fear as a landslide sends huge boulders crashing onto the mountain road.

The landslide was filmed on a mountain road in Wen County in the northern Chinese province of Gansu at around 2.40pm on 25th July.

According to local media, the landslip sent dozens of huge boulders tumbling down the mountainside, blocking a large section of the road.

The local authorities were informed of the incident and around 30 emergency workers and dozens of heavy goods vehicles were sent to the area to assist with the cleanup.

The rescue team worked for around seven hours and the mountain road was reopened at around 9.30pm with one lane of traffic.

No one was reported as injured during the landslide.

In the footage, several motorists are seen standing outside of their stationary vehicles on the mountain road, just ahead of the affected area.

As boulders from the roadside mountain crash onto the tarmac, sending thick dust into the air, the motorists stand relatively close and film with their phones.

However, they all retreat when the dust cloud grows and nears their position, with two men spinning on their heels to run away and keep a safe distance. 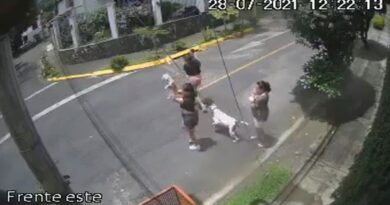 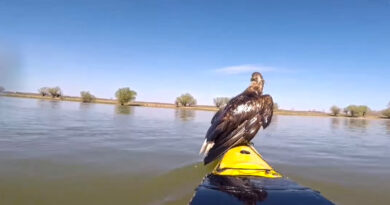